I mean way back and without Mr. Peabody’s Wayback Machine. One sure fire way to generate new ideas is to look at an issue or problem from a totally different perspective. Something that is totally foreign to you, or at least pretty darn close. You can do this by exposing yourself to people, places, and environments that are not part of your daily grind.

I had a list of some general improvements I wanted to make at work. So I was trying to think of what people, places, or things I could use to generate some new ideas. If you experience something you’re not familiar with, and force yourself to find the similarities between it and an existing problem, you automatically generate new ideas. It is inevitable as you have never looked at it from that perspective before. 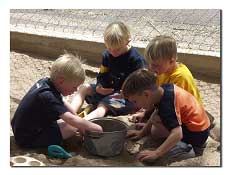 So I did it. I went back to kindergarten for a day. Yes that’s right I went to alocal kindergarten and asked the owner if it would be OK for me to attend class for a day. Of course initially I got the “stink eye” from the director, but after I explained what I was doing and convinced her that I was not a child molester, she happily agreed.

So I spent the day at Page’s Kindergarten in Roy, Utah, participated in the activities with the kids, and observed their behavior. All the while I was taking notes on what I observed. I did this with several business issues fresh in the back of my mind.

Here are a couple of the notes I picked from the list. I tried to make an association between my school observations and work.

Wow those Props! The kids were rehearsing a singing and dancing program. The real show was to be presented to the parents in just a few weeks. I was amazed at how many inexpensive props were used and how effective and entertaining they were. During my creative thinking keynote presentations I use a prop here and there. But it dawned on me there are a lot of places in my speech where I could use some more pep. Why couldn’t I use Photoshop, cardboard, and some glue to make some props just like the kids did? It would really make my presentations more lively and entertaining. I plan to do this next for my next presentation to make it more enjoyable for the audience.

I noticed right off the bat that as the teachers were trying to get the kids to do what they wanted, they only used positive reinforcement. They never said anything negative to the kids. When they wanted the kids to quit talking, sit still, or behave, they never scolded anyone; they only picked out someone who was doing it right and used them as an example. I plan to use this technique with some of the problem children in my group. Some are communicating well but others are not. Going forward, I’ll use the good ones as examples and not even point out the bad habits of the others.

I am a Pizza. One of the songs in the program was “I am a Pizza”. I clearly noticed the kids were much more excited and energetic singing this song than any of the others. I believe it was because this song had much stronger “fun factor”. Pretending you are a pizza is fun. You can make product development at work a lot more fun by pretending you are the product. Just think about all of the factors involved if you are the product! Since my return to school, I recently applied this technique by pretending I was the software program my company is developing. It allowed me to include some interesting features I had not thought of before.

So here is a partial list of the notes I took during my day at Kindergarten. Look at each one and try to think in detail how this idea might relate to your work environment.

• Learn how to shut up, you may need to ring a bell once in a while
• Lead by example, touch the heads of the kids being quite
• Rewards and recognition, keep it simple
• Constant reinforcement to get what you want
• Lots of pictures and models to explain concepts
• Know everyone’s first name
• No problem brainstorming 100’s of ideas simultaneously
• Group think can happen even at an early age if the conditions are right for it
• Attention span is similar to adults only less screaming
• Move some kids away from others who cause problems together
• Some kids just need more attention than others
• Smile and wave to guests
• Parents show up and say hi, if only for a few minutes
• Introductions and icebreakers
• They really like to play
• Pattern recognition is being learned, once the song starts they all join in
• Bring yourself down to their level, sit on the floor
• Singing is not perfectly harmonious, but they are trying like hell and committed
• When they need help they ask for it
• Total innocence, makes you think of their future and yours
• The program for the parents is in two weeks – Now we have their attention and this is serious
• Have some fun before the real work
• Make some comparisons then list priorities
• Can the dogs beat the ducks in a friendly competition?
• Common objectives and teams
• Put on our listening hats
• Having so much fun learning something new you don’t realize you’re learning
• Not afraid to ask why
• Small treats for a good job
• The instructors screw up too
• Practice the stuff that needs work
• Storytelling to make a point
• Distractions are inevitable, but know the objective and stay the course
• Floor mats so you know your place

Kind of makes you think doesn’t it? Next time you need some fresh ideas, change your routine. Go out and experience some environment you’re not used to. Preferably something way out there. Maybe even something a little wacky.