It seems like this gets harder to do as the years go by, but it is one of the things that keeps me going.

I recently ran across a subject in the area of science, physics, and mathematics called the “Chaos Theory”. I have always been taught that the world revolves around physics and mathematics. Being a Chemical Engineer and a rocket scientist, all of my college education and most of my professional career have been built around these assumptions. Chaos Theory was never in my college curriculum. In fact I had never heard of it before.

Chaos Theory challenges old assumptions that most things are predictable by math and physics. The theory covers many areas but primarily dynamic systems and how they operate. It describes that almost all things in life follow a dynamic pattern, not a linear one, even though math, physics, engineering are based on linear systems. The Chaos Theory implies that physics and math are the exceptions in life, not the rule. This certainly got my attention. Wait a minute; did I really waste my time in school?

This didn’t make sense to me, so I did a little research. 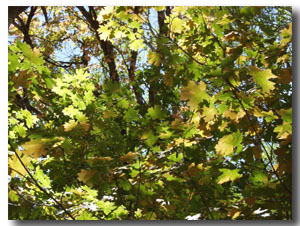 There are some real complicated definitions out there, but from what I understand, this is it in a nutshell (if you’re an expert in this subject, cut me some slack, I am just learning).

The Chaos Theory describes dynamic systems as systems that contain order and logic but never exactly repeat themselves. I was taught that linear math and physics govern the world. Which is true? Are they both right?

Of course I have used physics and math countless times, so I know they work. But what about this dynamic stuff that can’t be predicted with conventional math and physics?

So I looked around me to see if I could find something that appeared to have order but was too complicated to predict with math. Here is a list I came up with in about 5 minutes of thinking:
• Leaves on a tree
• Cloud formations
• Lightning
• Ocean waves
• Veins
• Nerves
• Wood grain
• Fire
• Rain
• Birds flying, eating, drinking
• Ants and ant hills

Of course it’s all around us. After researching it more, I describe the Chaos Theory this way;

“When you look at a dynamic system, you intuitively know there is some logical pattern involved, yet it is too complex to explain mathematically or predict. Yet intuitively, it still seems to make sense.”

The simplest example I can think of is a dinner conversation. All of us have had dinner with a group of people and watched the pattern of conversation. If you are sitting there listening to the entire conversation, the path it takes seems to make sense to everyone. Everything is linked or connected somehow. However if you get up to go to the bathroom, you will have no idea how the group was talking about new tennis shoes when you left, and Kim being pregnant when you returned.

So what does all this mean and what is my point? Well… I am not exactly sure, but here are some ideas. By actively studying a new subject matter, it will allow you to see things from a different perspective. I have just started learning about the Chaos Theory but it has already caused me to think about a lot of things differently. There is an infinite amount of examples out there supporting the Chaos Theory that even the most skeptical scientist could not ignore. Even though the theory says most things can not be predicted you shouldn’t just go and trash all your planning. I certainly don’t intend to stop writing good business plans or generating forecasts. However it does make me realize how many things are not in my control. It just further emphasizes the need for alternatives and backups.

Of course, I still believe that the laws of engineering, science, and math are fundamental. But to pause for a moment and assume they are the exceptions in the world, really opens your mind to new ideas.

Pick a new subject yourself that you know nothing about, but might be interested in. Go read about it for a few days.

I just started reading up on “Pringles can antennas” to intercept free Wi-Fi broadband from your neighbor. Wow.

Just go to Google and type in any new subject and read about it. See how it affects your beliefs and thoughts.