One of the fundamentals of creative is “Curiosity” and we are born with an ocean of it. The acceleration of life, I think, tends to drain our ocean to a pond and for some, eventually a dried up puddle.
But it doesn’t have to. Curiosity is one tool that’s always available to spark creativity.

My 2-year old grand-niece gets put in a time out once in a while. I thought it was hilarious the other day when she was told “Lily, you need a time out”.

Lily said “no Mom, You need a time out!”

That got me thinking; an adult “time out” maybe all we need to exercise our curiosity and thus be more creative. One of the fundamentals of TRIZ is that “Someone, someplace has already solved your problem. You just need to find it and apply it to your specific situation.”

Taking a “time out” to be intentionally curious can help you see the solution.

Nate Alder did just that.

Scuba diving in Brazil was the spark of an idea for a better snow skiing jacket. Nate was curious enough to ask why the Scuba suit was so warm. His curiosity led him to discover the suit has a liner filled with Argon gas.

Argon is an inert gas which means it will not react with other chemicals. Argon is used to preserve the Declaration of Independence, grow silicon crystals, and is the gas used to make a blue laser.

But in Nate’s case it has a warmer personality trait: It has very low thermal conductivity, which means it is an excellent insulator.

TRIZ lens 39 utilizes the principle of “Inert Atmosphere” and it is one of the 40 key principles to creativity. Curiosity and knowing someone, somewhere already had the solution lead to the TRIZ solution of using Argon to create a new kind of ski jacket.

I have said many times, “the reason most ideas fail is they never get started.”

Nate went about it the right way: he made a quick prototype for $100 and entered a new business competition with his new “Klymit”, Argon filled jacket.

When you have an idea you need to take a time out and ask yourself: “What can I do in the next 2 weeks to further the promise of the idea?”

When I interviewed Klymit’s Cory Tholl he said “Luck favors the man in motion” and that is the kind of attitude they reward at Klymit. That is where most people fail, they fail to do anything after they think of the idea.

Get up and do something.

Klymit has been a great success even though they have done no formal marketing. Their key is to simply get someone to try the jacket on.

“Once the jacket inflates, it forms a custom snug fit that always produces an, Ah-Ha…. from the customer.” says Tholl. 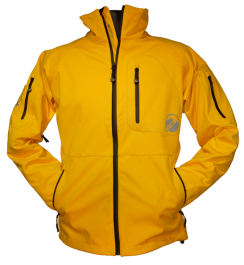 Keeping things in motion, tapping into curiosity and applying the other 39 lenses of TRIZ will surely take Klymit to the next level.

Let’s see what they invent next.