Rolling down the beach on my earth cruiser, I saw some kids throwing a ball that skipped on the surface of the water. Like skipping a rock across a pond. I had never seen something like this before. Being curious, I stopped and asked “what is it?” “Where did you get it?”, threw the ball a few times with the kids, said thanks, and left before they got all creeped out about some old man asking questions.

They told me it was called a Waboba.

I cruised on over to the local surf shop, Ron Jon’s, and bought a few of them for myself:

I went to the internet, did a little research, and found who the inventor was: 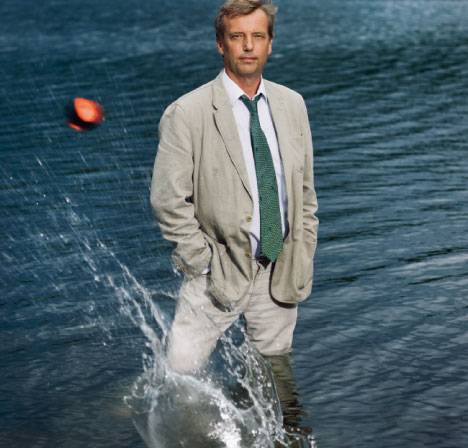 A couple of emails later I had a Skype call scheduled to interview him.

Like most inventors, I was pretty certain Jan probably used at least one of the principles of creativity I discuss in “Da Vinci and the 40 Answers” when he created the Waboba. That is why I wanted to interview him. After a 30 min call, I discovered he used at least 8 of the creativity principles.

Jan told me he got the idea by “just playing around.”

One day he threw a Frisbee up-side down and skipped it across the water of a swimming pool. Of course it didn’t work real well, but it did skip. Then Jan thought “that would be fun if you had an object that could really skip across the water. It could be a new kind of beach toy.”

Here are the creativity fundamentals I discovered talking to Jan:

Most creative ideas materialize when we are playing. And as adults, we don’t do enough of it.
Lots of playing around with different ideas and concepts lead Jan to a design that finally worked.

Because they never get started. Most people would stop after they skipped the Frisbee, but Jan didn’t. He never let go of the idea and spent time here and there thinking about it. Yes he had a real job at the time, he was a city manager, but he never let go of this “Fun idea.”

He went out and started “testing” many different types of ball designs and materials. Don’t be concerned about failure, the 1st go around almost never ends up being the right design but you have to start somewhere.

Everyone knows R&D stands for research and development. But it also stands for Rob and Duplicate. Find something that already exists that you can copy and apply for your own purposes. This is one of the fundamental concepts of TRIZ.

One definition of creativity: the combination of things that already exist but have not been used or applied previously in the same manner.

The outer Spandex cover of the Waboba uses the baseball stitching pattern to provide a feeling of familiarity. Rob and Duplicate.

Jan doesn’t like the term “Rob and Duplicate” he says it is more of “build on what others have done.” He is right, but I like using the phrase “Rob and Duplicate” because it makes people laugh, which in turns helps them remember the concept. If you can strike an emotional response from people, the message has a better chance of sticking.

Jan went through lots of changes before settling on the current design.

The Waboba ball consists of 3 materials:

• A jelly-like rubber ball as the main ingredient. It feels very much like one of those stress balls you squeeze in your hand

• An outer layer made of Spandex

At least 4 TRIZ lens are at work here in the Waboba ball:

The jelly plastic part of the ball by itself bounces just fine, but it sinks and is hard to grasp. The inner material is lighter than water and hence helps it float. The outer layer allows for a solid grip, even when it’s wet. In the TRIZ world, “composite materials” as a creative solution simply means combining unlike materials to make something better.

When Al Gore and Sarah Palin each lost their presidential elections, they turned to global warming and TV shows to lift them back into the limelight. Jan used a “lighter than water” material to provide weight compensation to make the Waboba float.

It’s a ball. Duh. But when Jan started out testing various ideas, a perfectly round ball wasn’t necessarily the obvious choice, until he tested a few design shapes.

When Jan was trying to come up with a name for the ball he kicked around a lot of ideas. What would be a cool name that was different for a “Water Bouncing Ball?”

By segmenting the phrase of what it was, or more specifically “what it did” the name jumped out at him.